Yak’éi yagiyee — Aloha! ʻAha Moananuiākea honors the strong cultural relationships between Kānaka Maoli, Native Hawaiians, and Alaska Natives, which include shared love of our lands and waters, our peoples, our languages, and our identities. On this page, you will find a range of resources — maps, websites, videos, and materials — that provide general background on the region, its people, and their cultures. Learners of all ages and backgrounds are invited to immerse in this rich Pacific heritage and explore topics of interest at a self-directed pace. Gunalchéesh — Mahalo!

Alaska and its First Peoples

The modern political borders between the United States and Canada have disrupted the traditional lands and waters of many Alaska Natives, who moved following seasonal availability of resources for farming, fishing, and hunting. There are five major groupings of Alaska Natives based on linguistic and cultural similarities: Aleuts, Northern Eskimos (Inupiat), Southern Eskimos (Yuit), Interior Indians (Athabascans), and Southeast Coastal Indians (Tlingit, Haida, and Tsimshian). Among themselves, Alaska Natives are organized by clans and families, with strong ties to places and resources. 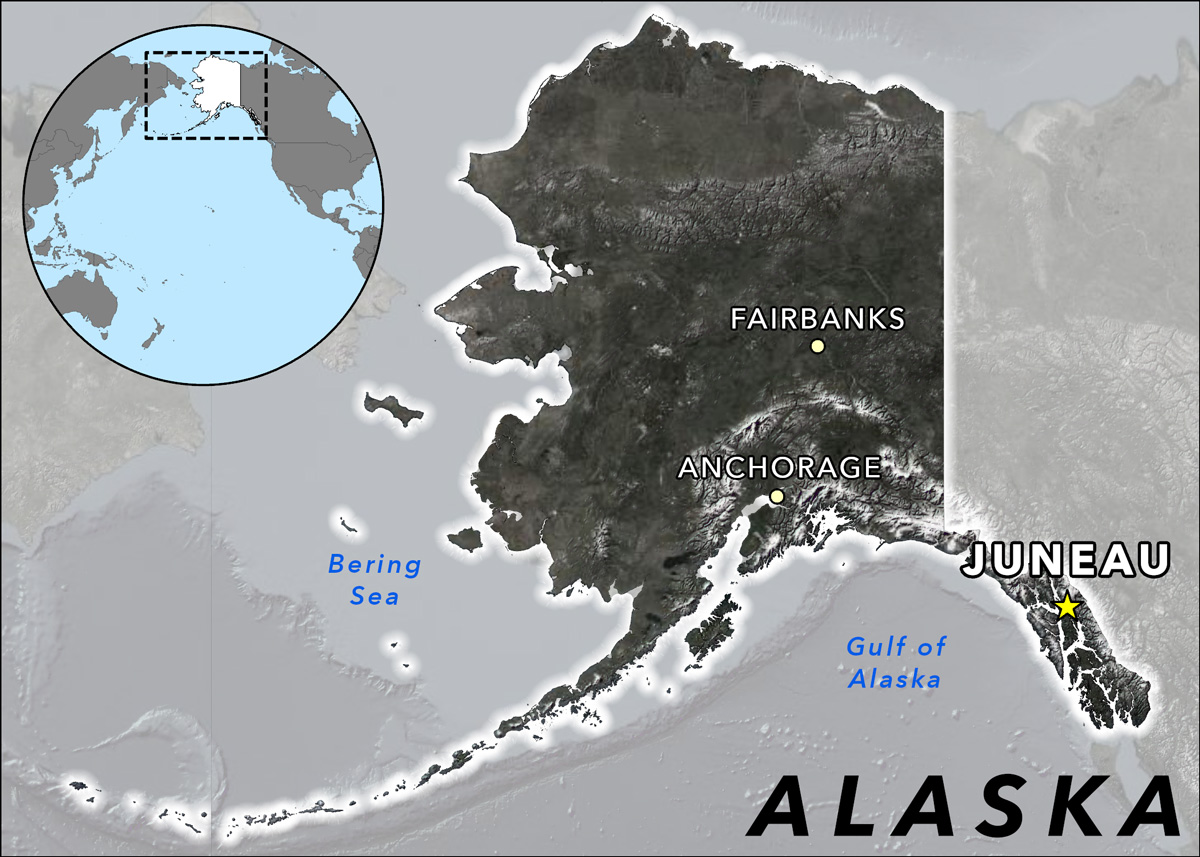 There are historical ties between Alaska Natives and Native Hawaiians, including moʻolelo (historical accounts) of ancient interactions, and migration and settlement between parts of Alaska and Hawaiʻi as a result of fur-trapping, whaling, the Klondike gold rush during the 1800s, as well as fishing to the present. 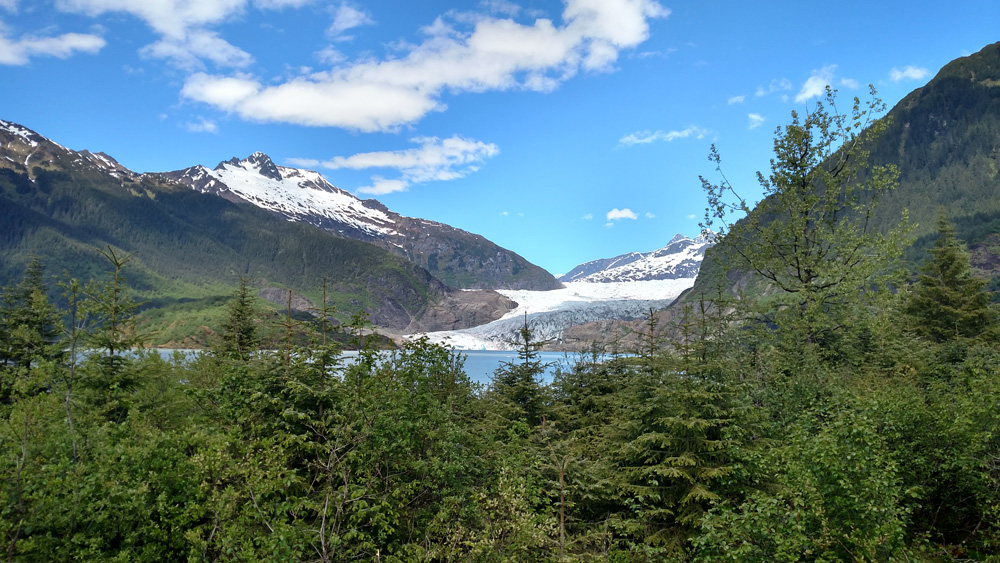 Today, the traditional territories of the Tlingit, Haida, and Tsimshian run through modern Alaska (US) and British Columbia (Canada), and they can be considered part of the Northwest Coast cultures. Although their languages are distinct from one another, they share similar social and cultural practices, and beliefs are intermarried with one another. They formerly lived in permanent villages as well as seasonal camps. Their societies are kinship-based and matrilineal, with great importance placed on family and generosity. Today, they work to strengthen their languages, perpetuate their rich cultural heritages, and steward their natural resources.

In 2018 and 2019, two conferences were held in Juneau, Alaska, and Honolulu, Hawaiʻi, respectively, to celebrate indigenous ways of knowing, resource management, and strengthening relationships with one another. 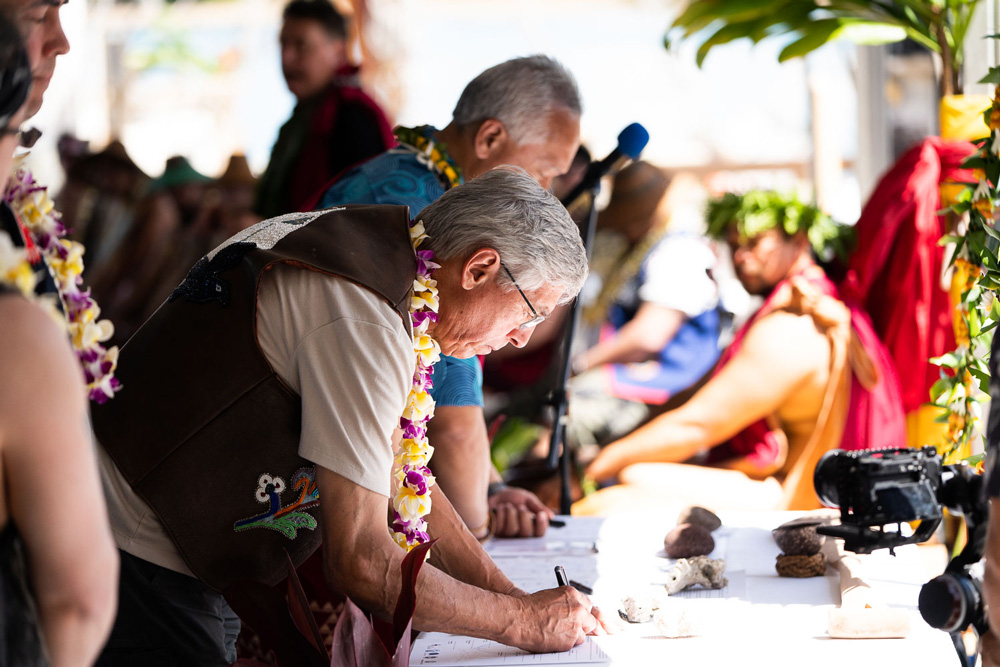 The official website of Sealaska, a for-profit Alaska Native Corporation owned by Tlingit, Haida, and Tsimshian shareholders. They draw inspiration from a shared heritage to protect their community’s greatest and most important resources - the oceans, forests, and people of Southeast Alaska.

The official website of the SSP, a dynamic network of organizations, tribal governments, entrepreneurs, fishermen, aunties, culture bearers, teachers, land managers, storytellers and more, all united by a common goal.

Lands and Waters of the Tlingit, Haida, and Tsimshian 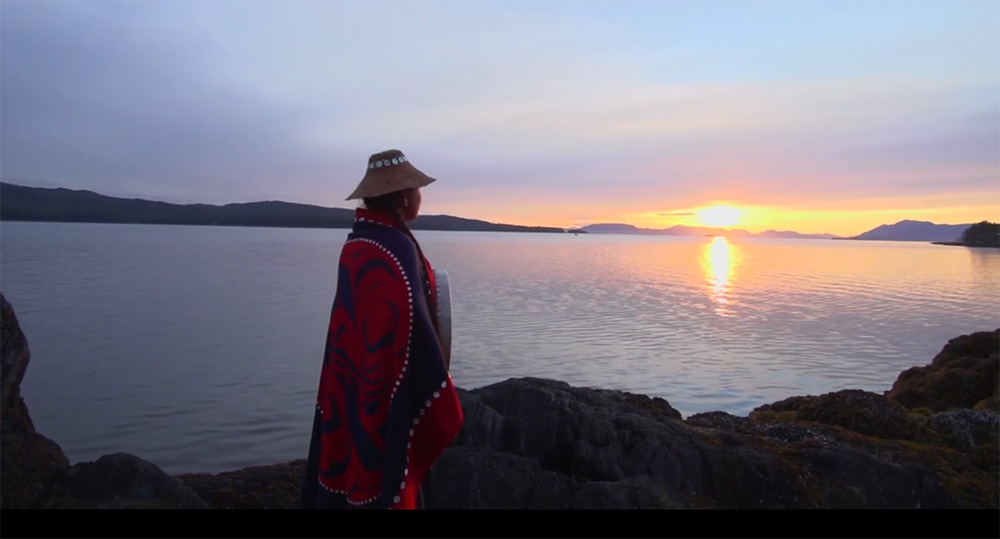 This Emmy Award-winning film is part of a series by producer Laura Lindhal and tells the history of Tlingit, Haida, and Tsimshian. Duration: 27:21

• Where are Haida Nation and Tlingit Nation Located? (Video)

A young Haida woman, Susie, shares her knowledge of Haida and Tlingit in a modern format that is relatable to ʻōpio (youth). Duration: 5:39

A PDF of a phrasebook that helps learners of any age begin to learn Lingìt/Tlingit.

Listen and watch as a few artists share their knowledge of wood carving and its connection to the environment and their culture of Southeast Alaska in this video by Wood Culture. Duration: 14:42 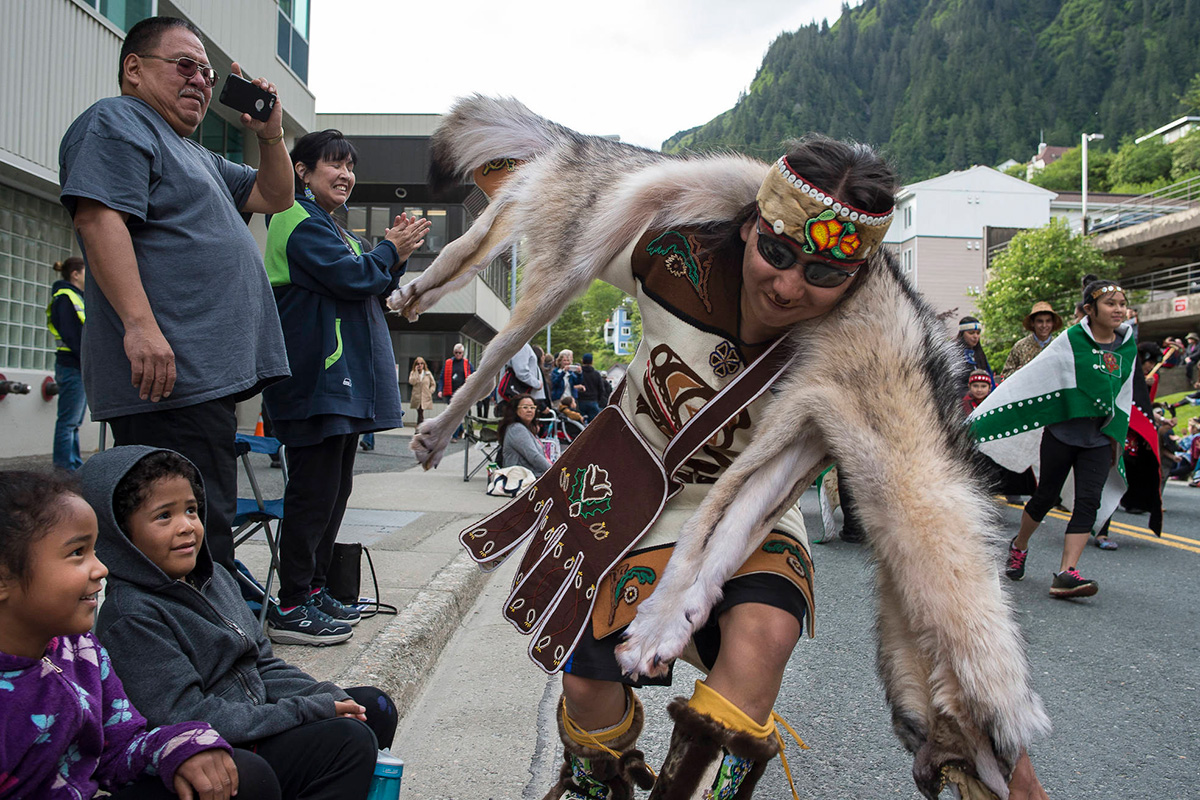 A page from the official Alaska State website with information and links to resources about Alaska’s native peoples.

This short YouTube video, produced by “That was History,” is part of a series on states that gives the viewer a quick overview of the history of Alaska from its beginning. Duration: 2:56

This PDF of a presentation prepared by the First Alaskans Institute for the State of Alaska Department of Natural Resources provides general information about Alaska Natives, their identity, and their beliefs.

Provided by University of Alaska Fairbanks, this document offers a timeline of important events in Alaska’s history.

This study, completed for the University of Alaska Anchorage, aims to help the people of Alaska better understand their economy through the examination of its people, economy, and fisheries. 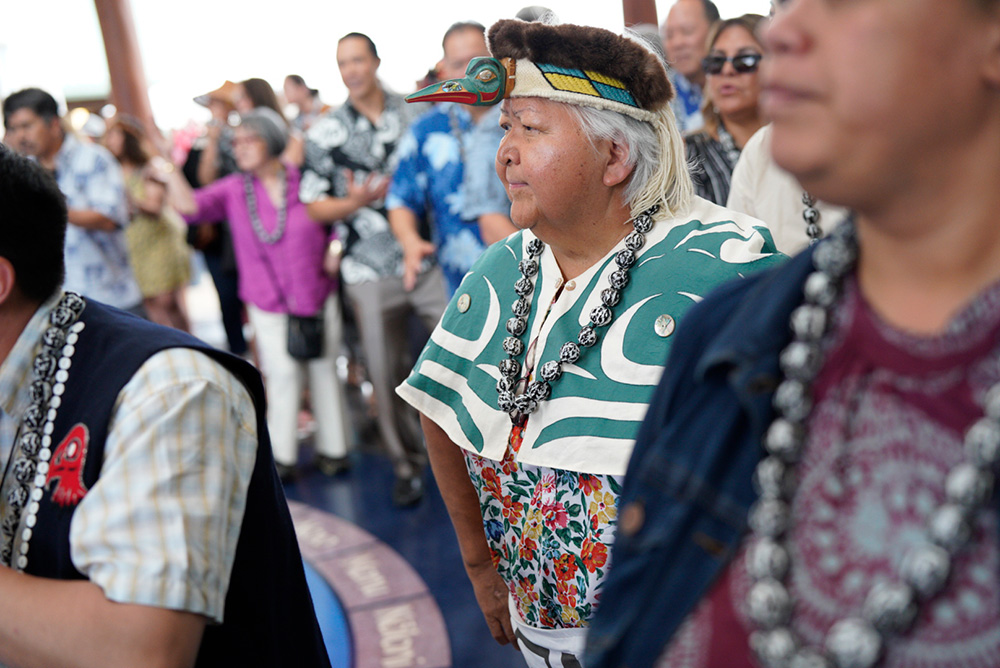 • What People Get Wrong About Alaska Natives (Video) https://youtu.be/lDU4PkSqWsQ


This short clip, produced by AJ+, shares some of the misconceptions and stereotypes of Alaska Natives. Duration: 2:52

• 10 Things You Should Know About Alaska Natives https://indiancountrytoday.com/archive/10-things-you-should-know-about-alaska-natives-I2JrTDNWiUyeX8r4QRiKlg


This article from Indian Country Today gives a summary of 10 things you should know about Alaska Natives.


This is a companion reader offered by University of Alaska Anchorage and Alaska Pacific University. It answers a few frequently asked questions about Alaska Native issues. 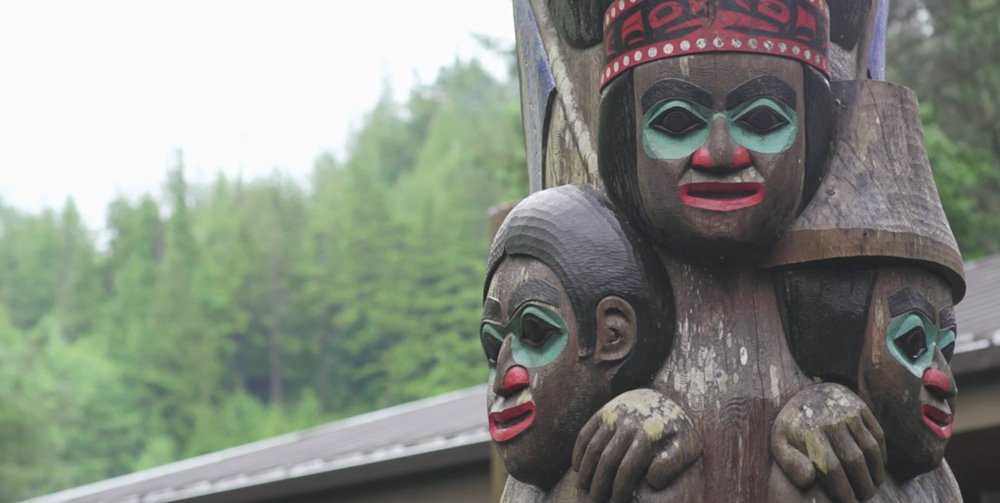 The official website of the First Alaskans Institute, a non-profit charitable organization that helps develop the capacities of Alaska Native people and their communities through community engagement, information and research, collaboration, and leadership development.

A resource site that compiles and exchanges information related to Alaska Native knowledge systems and ways of knowing, created by the University of Alaska.

A catalog of literary resources on Alaska Native language, culture, and identity, prepared in 2012–2013 by the Alaska Native Language Center at the University of Alaska Fairbanks. 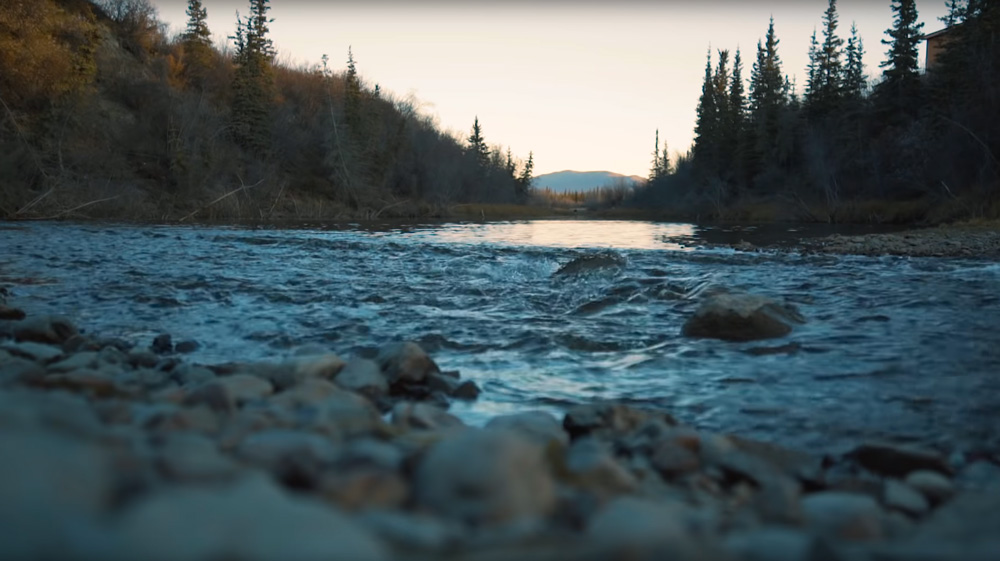 • This is the Story of Alaska Natives’ Fight for their Land: Our Fight to Survive

Produced by AJ+, this video is part one of a four-part series that gives an overview of the history of Alaska and the challenges Alaska Natives have been enduring. Duration: 10:43

• The Fight to Save the Dying Languages of Alaska (Video)

Many of Alaska’s native languages aren’t completely cataloged. This video, produced by Vice News, summarizes the efforts that are being made to capture the elders’ knowledge in order to stop some languages from completely dying out. Duration: 6:40