This cultural center is home to an institute that promotes Pacific indigenous knowledge and worldviews.

After some 20 years of community-wide planning, Pinky Thompson’s vision finally came to be; the Kaʻiwakīloumoku Hawaiian Cultural Center welcomed hundreds of supporters and well-wishers at its opening ceremonies on September 26, 2012.

The Hawaiian Cultural Center was the vision of former Kamehameha Schools Trustee and revered kupuna, Myron “Pinky” Thompson. He understood the importance of revitalizing Hawaiian culture and knew the catalytic affect it would have on Hawaiians’ self-concept, psyche, health, educational achievement, and well-being. Pinky envisioned a place where Hawaiians could gather to live and learn the ways of our people; where we could express hospitality to visitors, conduct traditional ceremonies, and raise the next generation of Hawaiians to lead our people towards a vibrant future. In late October of 1992, he called a meeting with Randie and Jamie Fong and asked them to carry his dream of building a cultural center forward. Mentored by Pinky since the historic 1985 landing of Hōkūleʻa in Waitangi, Aotearoa, both accepted the charge and promised him that they would see his vision through to fruition.

In January of 1994, the Board of Trustees of Kamehameha Schools gave conceptual approval for the construction of a cultural center at Kamehameha Schools Kapālama. Some 300 people were involved in the initial planning process which included students, staff, alumni, and members of the Hawaiian community. However, in the years that followed, the cultural center project became caught up in the politics of the Broken Trust controversy which was swirling around the community at the time, and the effort was eventually halted in 1998.

Two years later in July of 2000, under new executive leadership, the cultural center proposal was revisited, and efforts were made to re-engage the community. Over the course of the following two years, participation doubled, raising the total number of participants in the planning to over 600 people. After a period of research, discussion, and prayer, a formal name for the Center revealed itself: Kaʻiwakīloumoku. It was inspired by the story of Kamehameha as a young upstart chief who, upon visiting Hilo, was addressed by Chiefess Ululani as “the ʻiwa bird that hooks the islands together” – a premonition of the unification of the islands under his rule. In the fall of 2006, after many years of struggle and perseverance by staff, the Board of Trustees finally approved the construction of the Kaʻiwakīloumoku Hawaiian Cultural Center.

On June 11, 2008, Kamehameha Day, after a year and a half of preparation, some 400 people from the Kamehameha and larger Hawaiian communities assembled at the designated site of the cultural center for a Hoʻowehe, a blessing and groundbreaking ceremony. The morning began with all five members of the board of trustees, the CEO, the Kapālama headmaster, and other leaders partaking of ceremonial ʻawa to affirm their commitment to construct the Center. The observance ended in the late morning with the Schools’ leadership turning the soil with special ʻōʻō, and a blessing from the Schools’ kahu. Cultural Center construction was ready to commence in January of 2009.

However, due to the global economic downturn, Kamehameha Schools implemented financial equilibrium measures which delayed all capital projects. Then, in 2010, the Center’s construction plans became part of the Kapālama development master plan called Ke Kupu Mālamalama which set the project back on course.

After some 20 years of community-wide planning and political and economic challenges, Pinky Thompson’s vision finally came to be; the Kaʻiwakīloumoku Hawaiian Cultural Center welcomed hundreds of supporters and well-wishers at its opening ceremonies on September 26, 2012. The ceremonial cutting of the piko, the symbolic umbilical cords, for the Myron Pinky Thompson Hale, Ululani Hale, and Kūkulu O Kahiki green was followed by a grand lūʻau and festive entertainment. Extended celebrations took place at the Royal Hawaiian Center at Helumoa that evening, and a concert called Pō Māhinahina was held later in the week.

In 2013, Kaʻiwakīloumoku launched its Nohona Hawaiʻi program, featuring credited high school courses and large group engagement for grades K-8 focused on food preparation and traditional arts. It also re-launched the Cultural Events Series, featuring evening presentations each month for the community. In 2014, the first-ever Lā ʻŌpio, Youth Day, was hosted as part of the World Indigenous People’s Conference on Education which attracted some 400 indigenous youth. Students drafted a youth declaration which eventually made its way to the United Nations in New York. In support of the Mālama Honua Worldwide Voyage from 2014 – 2017, Kaʻiwakīloumoku served as a site for cultural training for the Polynesian Voyaging Society crew and Hawaiʻi educators from throughout the pae ʻāina.

Between 2017 – 2020, the Center started a new evening series called Lāhui Rising which was designed to create a respectful, safe, and enriching learning space for students, staff, alumni, families, and the community to hear and honor different voices and perspectives on matters of Hawaiian interest for purposes of education. The Center also implemented He Welo Noʻeau, a series of evening classes for families, staff, alumni, and the community. Courses include ʻŌlelo Hawaiʻi, Kī Hōʻalu (slack-key guitar), Beginning ʻUkulele, and Traditional Arts such as carving kīholo (hooks for large fish). Kaʻiwakīloumoku has hosted an array of special events and ceremonies, conferences and retreats, and it is the venue of choice for welcoming special guests. As we project into the future to 2030, it is with great pride and excitement that Kaʻiwakīloumoku soars to new heights and embraces its emerging role as a Pacific Indigenous Institute.

Special Mahalo
One of the outstanding aspects of the Kaʻiwakīloumoku Hawaiian Cultural Center that has contributed significantly to its effectiveness as both an educational facility and a cultural space is its design. Maurice Kondo, co-founder and owner of INK Architects, Inc. and Scott Harada, now managing principal of the firm, dedicated their skills, talent, and heart for many years to ensure that Pinky’s vision and our collective dream became a reality. Their attention to detail (Hale Mana design), innovative solutions (Kūkulu O Kahiki green), and work ethic have resulted in not only an award-winning design, but a place of human spirit that connects across time and place, and radiates out into the Pacific and the greater world. Kaʻiwakīloumoku owes a debt of gratitude to Maurice Kondo and Scott Harada of INK Architects, Inc.

Inspired by life-changing experiences as a young soldier at Normandy during WWII, Myron Pinky Thompson later composed a prayer that encouraged people to seek guidance by reaching out to their departed loved ones and to the supreme power in their lives. Pinky’s Pule is featured in a special art piece located in the ma uka vestibule, designed by the Kamehameha Schools graphics department of the Communications and Community Relations division. 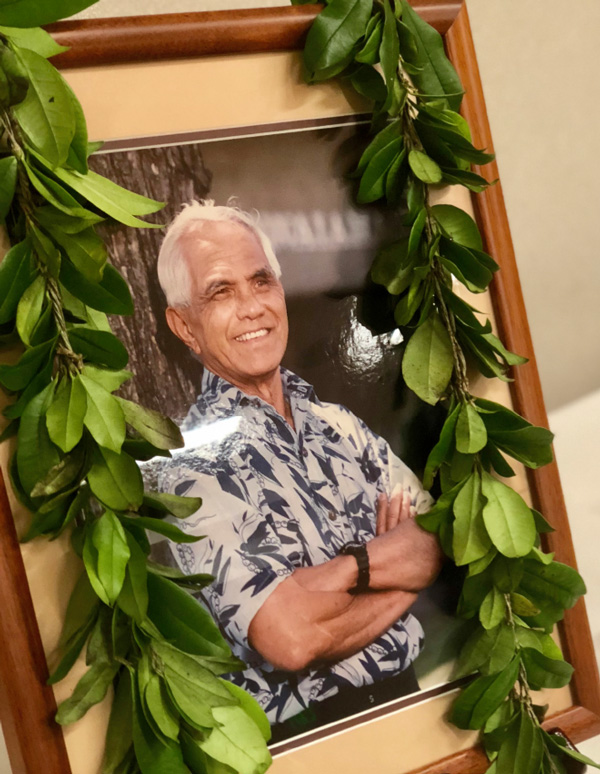 “Let us call forth the Supreme Powers of our individual spiritual beliefs to join us. For those who have them, call forth their ʻAumākua – our Guardian Angels – to be with us today. And now reach inside of ourselves and touch the spirits of our family members and special friends who have assisted us to be people who care, want to share, and dare to dream impossible dreams. Let us gather our spiritual strengths so that we can Aloha them, thank them, for their continued encouragement, guidance, and protection as we proceed through life. Now, for our Supreme Powers’ blessing upon this gathering: in the words of my mother in her language of comfort, Na ke Akua e hoʻopōmaikaʻi iā ʻoukou.”